One man’s staircase – another man’s Everest! 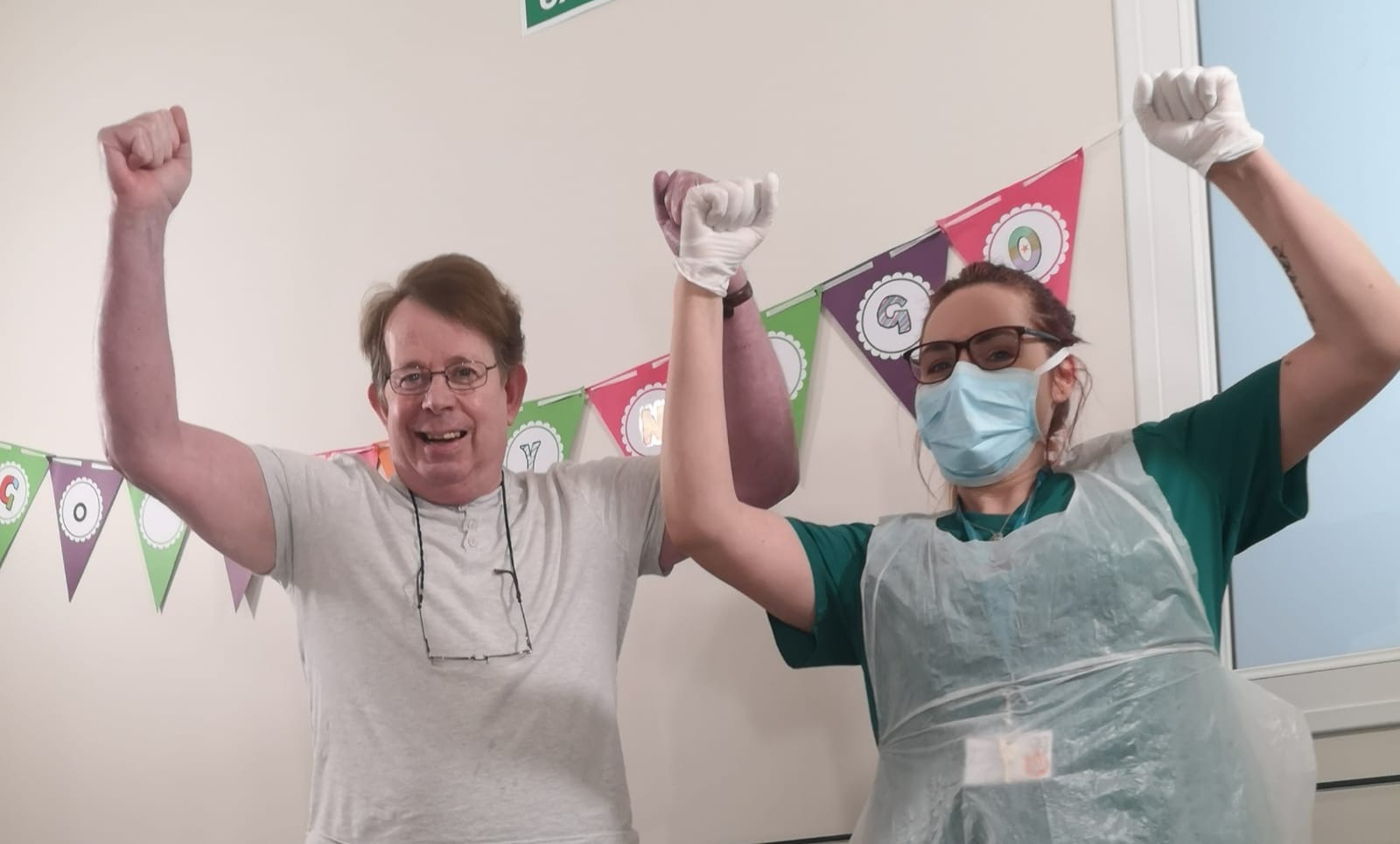 In 2011, Alwyn, suffered a life changing brain injury.  His was discharged home without a plan or any support, which sadly is the same for many post brain injury.   Instead, his wife organised their own rehabilitation program and received guidance and support from ourselves throughout this.    Last year, Alwyn started to deteriorate and was readmitted into hospital for ‘short term’ investigation, but the weeks turned into four long months and he lost the ability to walk and his cognitive processes started to follow the same pattern.  Unable to return back home, Alwyn was transferred to Elysium Health Care (The Bridge in Middlesbrough) and his rehabilitation started again with a new multidisciplinary team in September 2019.

Early 2020, he started to improve and his confidence began to grow.  But then came lockdown and visiting was understandably stopped.  Alwyn needed a goal and something to work towards to keep him going.  He heard about the London Marathon being cancelled and that many charities would not be able to receive much needed funds from sponsored runners.  Alwyn bravely decided to set up a fundraiser to climb 2.6 flights – every day for a week!  The goal was to raise £500 for Headway Darlington & District – for helping him and his family adjust to life after brain injury.

Walking downstairs is as much as a challenge walking up them…and to him every step would be a challenge.  Additionally, due to his brain injury, it is very difficult for Alwyn to initiate a task or motivate himself to do it.   At first, the team at ‘The Bridge’ became his support and his motivation, then he started to see how many people had started to sponsor him, willing him to do this – believing in him.

Izzy Carlin, Assistant Psychologist, and Laura Nicholls, Speech & Language Therapist, started to capture his daily triumphs on camera so that his family could see his efforts.  Izzy then made a video, for Alwyn, to remind him of what he had achieved – she also sings the backing track to the video as an extra special touch!

We wanted to share this story of inspiration.  Never stop believing.  To sponsor Alwyn you can do so by clicking this link :https://www.totalgiving.co.uk/mypage/climbthestairs

We use cookies on our website to give you the most relevant experience by remembering your preferences and repeat visits. By clicking “Accept All”, you consent to the use of ALL the cookies. However, you may visit "Cookie Settings" to provide a controlled consent.
Cookie SettingsAccept All
Manage consent

This website uses cookies to improve your experience while you navigate through the website. Out of these, the cookies that are categorized as necessary are stored on your browser as they are essential for the working of basic functionalities of the website. We also use third-party cookies that help us analyze and understand how you use this website. These cookies will be stored in your browser only with your consent. You also have the option to opt-out of these cookies. But opting out of some of these cookies may affect your browsing experience.
Necessary Always Enabled
Necessary cookies are absolutely essential for the website to function properly. These cookies ensure basic functionalities and security features of the website, anonymously.
Functional
Functional cookies help to perform certain functionalities like sharing the content of the website on social media platforms, collect feedbacks, and other third-party features.
Performance
Performance cookies are used to understand and analyze the key performance indexes of the website which helps in delivering a better user experience for the visitors.
Analytics
Analytical cookies are used to understand how visitors interact with the website. These cookies help provide information on metrics the number of visitors, bounce rate, traffic source, etc.
Advertisement
Advertisement cookies are used to provide visitors with relevant ads and marketing campaigns. These cookies track visitors across websites and collect information to provide customized ads.
Others
Other uncategorized cookies are those that are being analyzed and have not been classified into a category as yet.
SAVE & ACCEPT